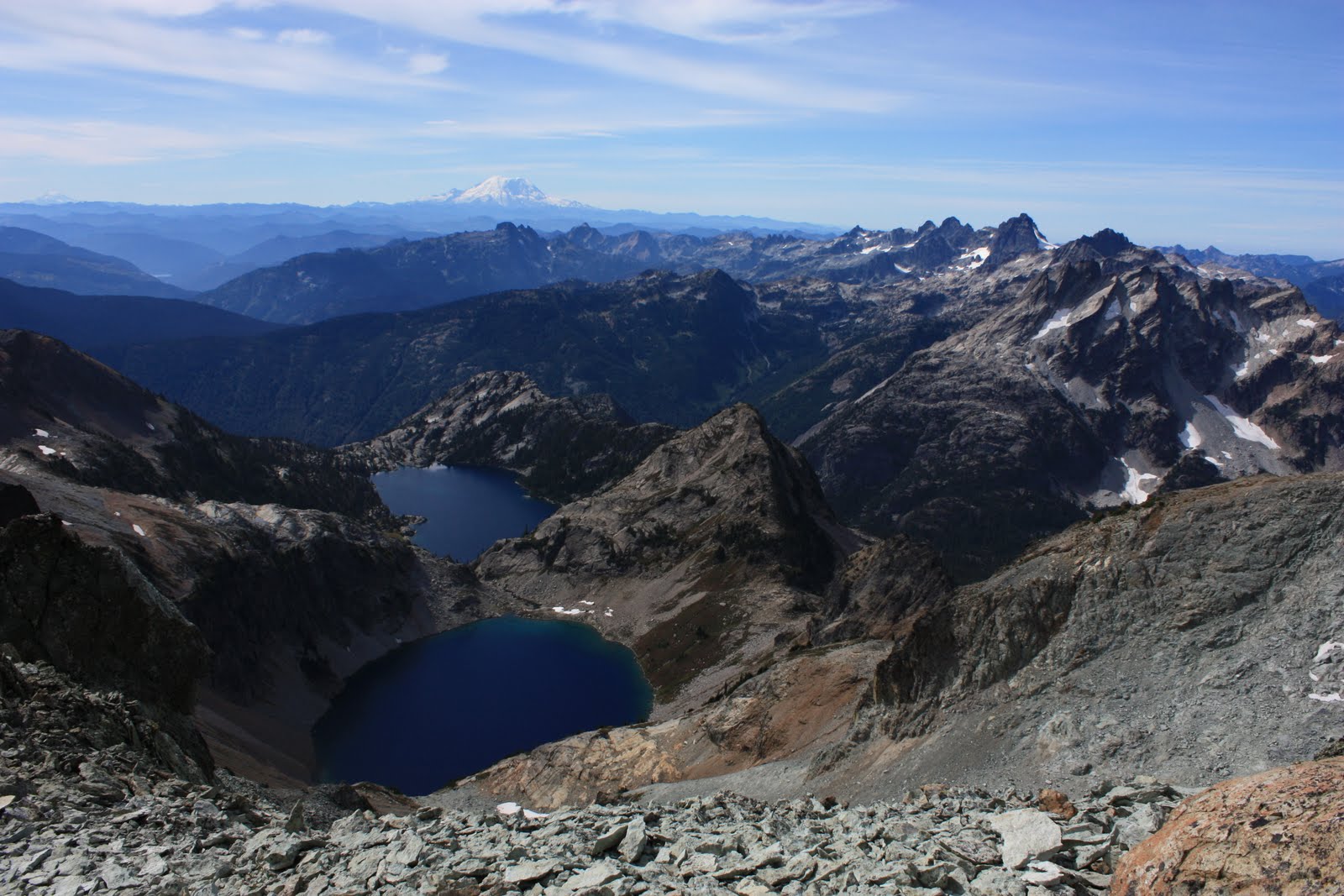 Mike and I departed Boston Saturday (Sept 12) at 3:15pm and arrived in Seattle at 8:10pm. It was only about a 4 hour flight across the country (no head wind). We met up with Gina, Nate and Paresh for some yummy pizza and a couple of drinks. I spent Saturday night at Gina and Nate’s lovely apartment. Sunday, Gina and I took the ferry over to Whidbey Island and walked around Fort Casey, had lunch at a little Thai restaurant, then drove up to Deception Pass to take in the beautiful views. That evening Gina, Nate, Paresh, Sibyl, Mike and I went out to eat in West Seattle and I moved my belongings over to Paresh and Sibyl’s place where I spent the rest of the vacation. Mike and I packed quickly for our backpacking trip up Mt. Daniel and went to bed. We woke up relatively early on Monday and headed out to the Cascades. We experienced some traffic, difficulties locating film for the video camera and extreme dirt roads, which landed us on trail at about 3:30pm, another late start yet again… We’re getting good at this! The trek to camp was a bit slow due to the fact that I had blisters from a hike we had done the previous weekend. They began to hurt only an hour into our hike and never stopped hurting from that point on. “Use moleskin!”, you say. I did, matter of fact, I got blisters under the moleskin. Yeah… I’m THAT good! We finally arrived at camp around 6pm and set up shop just as the sun set. The timing actually worked out pretty well. Tuesday morning we were on the trail leading to the summit of Daniel at about 8:30am. We watched as some other hikers headed up ahead of us and took note of the trail they chose. We chose a route that was a little longer because of a conversation we had with another hiker the night before. It was a more round-about way, traversing the inner edge of the bowl through lots of scree fields. It was a long trek and my blisters were not very happy with me. When we reached the summit I breathed a sigh of relief… until we realized that we weren’t at the actual summit… oh no… this was just the East Summit… So after some hemming and hawing on my part, onward we trekked to the actual summit of Mt. Daniel and it was amazing!! It was a fairly small spire that only one person at a time could stand on top of. After writing in the summit log, we chatted with another couple and then headed back to camp. We took a much shorter way down (the way we had taken note of that morning), which my blisters were very thankful for. We watched as the couple we had chatted with on the summit scrambled down this strange trail that was far off the beaten path. It was entertaining and we were imagining how pissed the chic probably was at her boyfriend for dragging her down this “not so friendly” looking path. We made it back to camp with daylight to spare and had dinner by the lake, a nice way to end the day. Wednesday morning we awoke leisurely, packed up and headed out. We made it to the car by about 12:30 and headed back to Seattle. On the way we stopped for a nice Italian lunch and then to catch a glimpse of Snoqualmie Falls. That evening, Paresh, Mike and I went to Feathered Friends to see Zoe Hart’s (a super awesome chic climber) slideshow. It was AWESOME! Thursday, Mike and I bummed around Seattle with Gina, that evening Gina, Paresh, Sibyl, Mike and I had an excellent meal at a Mexican restaurant in West Seattle. After dinner, Mike, Gina and I went bowling. Gina kicked out BUTTS!!! She bowled 6 strikes in a row!! It was amazing!! It was like the more she drank, the better she bowled! Ha ha ha! 😉 Friday, Mike and Paresh went climbing at Index and I took my blisters and the Beetle to Mt. Rainer. I almost got a speeding ticket in the park! Pshhh!! These park ranger’s ain’t seen nothing!! They should see me drive around MA! Speeding… HA! 😉 Rainer was just as beautiful as it was during my last visit and Mike and Paresh had an excellent time at Index. We all had a splendid day! Saturday morning was a washout. Paresh, Sibyl, Mike and I had a filling breakfast at a lovely little restaurant in West Seattle and then did some shopping at Second Assent, that evening Mike and I went to Safeco field to watch a Mariner’s game. The Mariner’s were playing the Yankee’s and unfortunately the Yankee’s won… Boooooo! It was still a fun game, though! 🙂 Sunday, Paresh, Mike and I headed out to Leavenworth for some climbing. We had a delicious breakfast and then headed up to our climb! It was a beautiful day, we all got a lead in and had grand ol’ time! What a way to end our trip!! That night I stopped by Gina’s to say goodbye and she, being the SUPER nice person that she is, brought me back a slice of a Snicker’s cheesecake from the Cheesecake Factory and put a little candle in it for my birthday!! Awww!! Gine, you’re the BEST!! Monday… Happy Birthday to me, I wish I could have flown for free (that was a terrible attempt at rhyming)!.. We arrived at the airport around 7am and finally arrived in Boston around 6:30pm… the entire day was spent flying… yay me! Ha ha ha! All in all it was an amazing trip, filled with good times, lots of laughs and beautiful views!! I LOVE Washington!!